Where Do Law Firms Stand When It Comes to Gender Equality? | BCGSearch.com

Where Do Law Firms Stand When It Comes to Gender Equality?

What do you think about this article? Rate it using the stars above and let us know what you think in the comments below.
749 views

Summary: Find out which major law firms are leading the way in 2017 in gender equality. 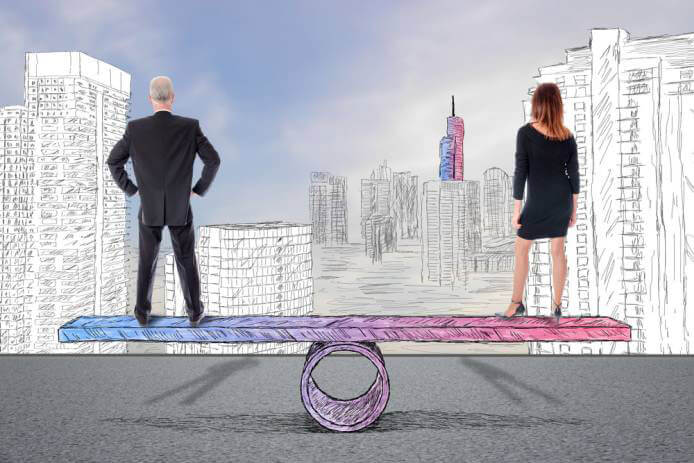 Law firms, bar associations, individual attorneys, corporate clients, and others continue to tackle the issue of gender equality in law firms. Despite about half of all law school graduates being female—and well over 40% of law firm first-year classes being female—women are not represented even nearly equal to men in partnership ranks and women continue to leave law firms at a far higher rate than men.

In 2017, where do firms truly stand when it comes to gender equality? What factors besides statistics inform the “gender equality” issue? When all factors are taken into account, which law firms are leading the way in gender equality and inclusion?

One way to assess relative gender equality within a law firm is by looking at the gender makeup of its equity partners. Given that the national average for female equity partners is approximately 18%, by this measure it would appear that firms with higher women equity partner percentages are doing well (or at least better than average) in reducing the gender gap.

Percentage of Women Promoted to Equity Partner in 2016

Total partnership numbers may not be the best measure of a firm’s modern-day efforts towards gender equality, however, given that existing partnership ranks reflect decades of promotion decisions. In this regard, Bloomberg’s Big Law Business looked at 2016 partnership announcements of all AmLaw 100 firms to see how many new partners were women. The study concluded that, overall, nearly 37% of all attorneys who made partner in AmLaw 100 firms in 2016 were women.

The Diversity & Flexibility Alliance also conducts annual surveys of the gender makeup of major law firm new partner decisions. According to the organization’s 2016 New Partner Report, based on partnership promotions of 134 firms, 37.3% were women and 62.7% were men. Among the firms that had 2016 partnership classes with more women than men were: Farella Braun (100%), Blank Rome (71.4%), Andrews Kurth (66.7%), Cadwalader (60%), and K&L Gates (58%).

Law360 recently began compiling its own list of the 100 best U.S. law firms for women. That publication’s list is based on firms’ percentage of female attorneys overall, as well as female equity and nonequity partners. “For the firms that nabbed spots on the list,” the article explains, “the number of women at all levels of the firm shows that firm leaders are finding some new ways to open doors and increase diversity.”

Other Factors That Influence Whether a Law Firm Is Female-Friendly

The concept of “gender equality” in the law firm context is complex and cannot be reduced to partnership statistics alone (although the opportunity for women to “make partner” equal to men is clearly an important consideration, given the financial benefits and prestige associated with becoming an equity partner). Other factors to be evaluated are how many of a firm’s leadership positions are held by women and whether the firm has policies and programs that benefit women.

Two organizations, Working Mother and Flex-Time Lawyers, take a holistic approach in putting out their annual survey of law firms that are attractive places for women to work. As noted in the introduction to Best Law Firms for Women 2016:

In the last decade, the Working Mother & Flex-Time Lawyers Best Law Firms for Women initiative has recognized U.S. law firms that create and use best practices in retaining and promoting women lawyers. The winning firms lead the industry in supporting flexible work arrangements and offering generous paid parental leave. The Best Law Firms also focus on women’s business development and parity in compensation as well as increasing women’s representation among the equity partnership and leadership ranks.

All of the firms that made the list offered flexible work arrangements in the form of flextime, reduced hours, annualized hours, or job sharing. Other policies that many or all of the firms offered were paid maternity and adoption leave, child care (including sick-child care, backup child care, and before/after school child care), sponsorship programs, networking groups and events for women, and women-focused business development initiatives.

When it came to highlights for various firms on the list, the survey found that Arnold & Porter “nurtures [the] development [of female lawyers] with myriad training initiatives, flexible schedules and at least 18 fully paid weeks of birth or adoption leave (plus $10,000 in adoption aid).” For Baker & McKenzie, the “Global Gender Initiative helps propel its talented women to success, generating opportunities (among them a 12-month sponsorship program) that raise their profile and increase their odds of being named partner.” At Kaye Scholer (now a part of Arnold & Porter), “Work life integration is a central theme…where alternative schedules are common.”

Morrison & Foerster: “New moms may reduce their hours for a year, an option that has led to near-total retention.”

Pillsbury: “Every office here has a liaison who guides attorneys using reduced-hours, flexible or remote positions; anyone taking extended leave is assigned a partner as a point of contact.”

Law firms continue to take concrete steps forward on the path towards gender equality and inclusion. The most progressive firms are promoting more women into the ranks of equity partnership, hiring and retaining more women attorneys at all levels, and placing more women in positions of power—including rainmaking, management, and compensation roles.

But gender statistics are just one part of gender equality, which includes ensuring that law firms are places where women can (and want to) work at in the same ways as their male counterparts. Firms that are at the forefront of the gender equality challenge are taking proactive steps to institute policies and programs—including flexible work arrangements, child care options, mentorship opportunities, and business development initiatives—that benefit women and facilitate their long-term success.

"One of the best things about working with BCG is the access to law firms that BCG has. BCG..." Read more

"I liked being able to approve the law firms for application [online]. [Working with BCG]..." Read more

"Karen was incredibly thorough, number 1, and very responsive to my needs. She really found some excellent firms..." Read more

"Harrison is very thorough, on top of it, proactive and hard working. It took a lot of pressure off me for you to..." Read more