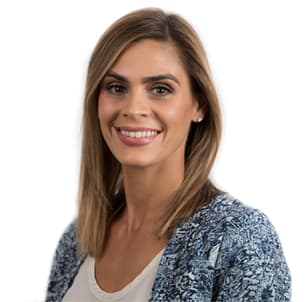 A Florida native and former corporate lawyer with Greenberg Traurig’s New York office, Ms. Portela makes partner, counsel, and associate placements throughout the Eastern seaboard. She specializes in firms in Florida, New York, and Washington D.C. Ms. Portela is a member of the Florida and New York bars.

The daughter of medical doctors, Ms. Portela became interested in law while participating on her high school’s Constitution Team—a debate-style national competition focused on the Bill of Rights. Her team placed second in the nation.

Ms. Portela joined Greenberg’s Corporate and Securities Department in New York, where she worked on a diverse set of matters, including corporate governance, M&A’s, IPO’s, REIT work, and representation of public entities before regulatory agencies. She also had a unique opportunity to work closely with one of the firm’s biotech clients—essentially acting as the company’s chief legal officer for securities filings. She enjoyed the experience and it eventually led her into corporate counsel work.

After several years in New York, Ms. Portela (by now married and a young mother) moved back to Miami and took a position as Vice President and Corporate Counsel for Terremark Worldwide, a data storage company. Shortly after starting, Verizon acquired Terremark, so Ms. Portela oversaw Terremark’s due diligence effort in the $2 billion acquisition and then spent five years as Assistant General Counsel of Verizon.

Ms. Portela switched from practicing law to legal recruiting after successfully assisting two friends make job transitions. She found legal recruiting to be a perfect fit for her background and talents, allowing her to utilize her knowledge of the legal industry and draw upon the interpersonal skills she honed from years of facilitating deals, interfacing with counsel, and managing teams of attorneys. She especially appreciates connecting with candidates on a personal level and counseling them through the entire job search process—from brainstorming, to reviewing resumes, to prepping for interviews, to helping smooth out the jitters and make sound decisions.

Ms. Portela’s husband (a fellow Florida Gator) works in the commercial real estate industry. The couple has three young children and they spend as much time as possible on their shallow-bottomed “Flats Boat” in the waters around Miami—sport fishing, diving for lobster, and snorkeling. They love the water so much they even head to aquatic destinations for vacations. They recently returned from a trip to the Abaco Islands in the Bahamas, where several families (and about 15 kids!) rented a boat and went island hopping among the Cays. To clear her mind and recharge, Ms. Portela goes running and takes Pilates classes.

BCG was very responsive and provided me the opportunities that I think were more specific to what I was actually looking for, than other recruiters and you guys had way more contacts and opportunities...Read More

I really appreciated Jessica's responsiveness and how quickly she got me interviews and that I was able to get a job very quickly. She was easy to communicate with and was always available. The respon...Read More

[My favorite thing about working with BCG was] the responsiveness. [Working with BCG] made it a whole lot easier, you made everything so you just click and say yep this works for me or nope this doesn...Read More

[My favorite thing about working with BCG is] the materials they provided for the interview process. I [also] feel like they knew what I was looking for. [They found] the position I was looking for an...Read More