How Can an Attorney Handle Afternoon Drowsiness? | BCGSearch.com

How Can an Attorney Handle Afternoon Drowsiness?

What do you think about this article? Rate it using the stars above and let us know what you think in the comments below.
1741 views

Summary: Learn how to get over afternoon drowsiness in this article. 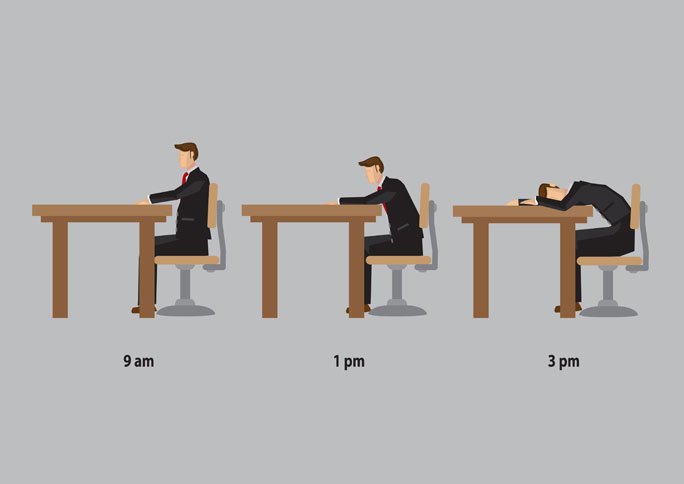 Question: Most days I'm alert and productive until lunch. In the afternoon, though, I have to drink so much coffee, my co-workers call me Shakes the Clown. Help!

Answer: Ah, the postprandial drowsiness syndrome. We know this one intimately. First, the good news: There's probably nothing wrong with you. Now the bad news: Periodic dips in alertness are written into our genes. All adults, even non lawyers, get them. For many of us, the most noticeable dips occur about six to eight hours after waking, then if we're lucky again at bedtime.
To understand what's going on, consider the opponent-process model of sleep and alertness pioneered at Stanford University's Sleep Disorders Center. For every two hours of consciousness, your body posts about an hour of sleep debt, says Stanford's Dr. William Dement, and as any law school loan officer will tell you, debts must be repaid. The longer you remain in arrears, the stronger the urge to sleep becomes.

To balance things, the body has its own internal Starbucks. Within the circadian alerting process, periodic waves of chemical stimulation are pushed into our systems. Instead of caffeine, our noggin-based coffee shops dope us with compounds designed to jazz us up and improve alertness. Experts have documented an initial surge of these chemicals upon awakening. Then they begin to wane around lunchtime, only to increase again in the later afternoon.

Sleep, Drink, and Be Merry

What can a somnolent lawyer do? First, forget any old saws you may have heard. Skipping lunch won't help much because it's the dip in the alerting chemical, not the digestive process that accounts for most of your sleepiness. (That said, eat more proteins and less carbs at midday; the latter boosts the sleep-inducing compound serotonin.) Similarly, don't count on exercise alone to resurrect you from the land of Nod. Some people claim a lunchtime workout brings them back to life, says Cornell University sleep expert James Maas. The truth is, even if they hadn't worked out, they would have felt pretty good by 3 p.m. anyway, because the dip has usually passed. If you can swing it, Dement recommends a 20-minute power siesta, with a twist. Right before dozing off, drink a cup of coffee or pop a caffeine pill (typically 100 to 200 mgs; check with your doctor). It will take about 20 minutes for it to hit your system, so the caffeine will kick in just as you're waking from the restorative nap—a double whammy of stimulation. Skeptical? A 20-year old study used a driving simulator to study accident rates during the afternoon dip. Volunteers who used the coffee and nap trick experienced far fewer accidents than others. What if you can't possibly sneak in a nap? On the rare occasions when we have aced such a chilling scenario, 5 to 10 minutes of brain-wave-slowing meditation have proved almost as effective as 20 minutes of actual sleep. If you can't find even five free minutes in your work schedule, consult an employment attorney. Six-figure unfair labor practice settlements are the stuff that dreams are made of.

What do you think about this article? Rate it using the stars above and let us know what you think in the comments below.

"I liked being able to approve the law firms for application [online]. [Working with BCG]..." Read more

"I was just notified yesterday that Fenwick is inviting me for a phone interview. It's all..." Read moreRichard Praseuth
Loyola Law School, Class Of 2010
Placed at Kirkland & Ellis LLP.
Hacienda Heights, CA