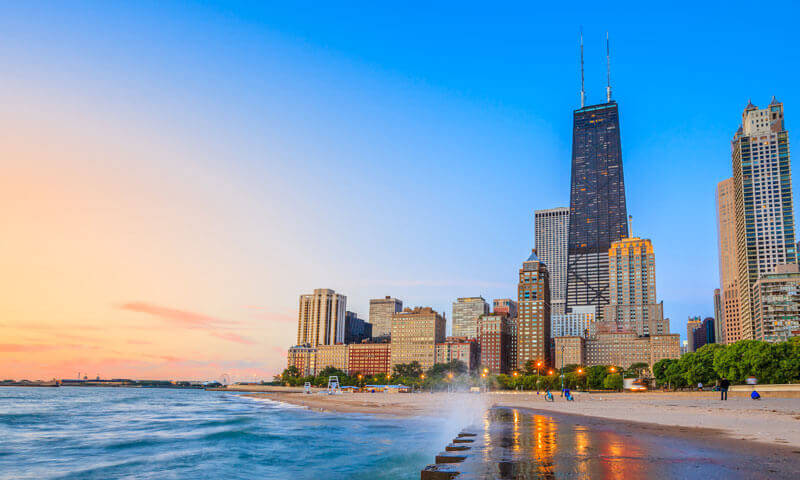 Chicago: The Pinnacle of the Midwest
Well known for its beautiful skyline along the shores of Lake Michigan, Chicago, an economic powerhouse, is definitely a town you will visit and not want to leave. With the world's busiest airport, O'Hare, and its centralized location, Chicago is a one of the most popular destinations for business and pleasure in the United States. Chicago is home to some of the largest companies, including Boeing, Sears Roebuck, Kraft, Allstate, Motorola, McDonald's Corporation, and Exelon. According to the 2000 U.S. Department of Commerce Census, the population in Chicago grew by 4% from the period 1990 to 2000 (to approximately 2,895,000), and it is one of the most diverse cities in the nation, as well as one of the youngest, with a median age of 31.5. With a heavy concentration in the professional services, health care, finance, and manufacturing industries, Chicago ranked third to Los Angeles and New York in 2002 for total number of business establishments, according to Sales & Marketing Management's 2002 Report.

Tour Chicago's Fantastic Architecture by Foot, by Boat, or by Train: As Chicago is the birthplace of the skyscraper, Chicago's skyline is a study in modern architecture and includes three of the world's tallest buildings-the Sears Tower, the Amoco Building, and the John Hancock building. The Sears Tower, perhaps the most impressive, was completed in 1973 and looms high above other dramatic and impressive architectural Loop icons built by some of the world's most renowned architects, including Daniel Burnham, Frank Lloyd Wright, Helmut Jahn, and Mies Van Der Rohe. Cruise the Chicago River on the Fort Dearborn, hop on the "el," or catch a Frank Lloyd Wright tour on foot.


Premier Shopping on the Magnificent Mile: Extending one incredible mile, Chicago's best-known shopping district, known as the Magnificent Mile, provides a delightful way to spend an afternoon. With more than 450 shops-including Tiffany's, Niketown, and Bloomingdale's-the Mag Mile extends from the edge of the Chicago business district (the Loop) to the Bloomingdale's building. The Water Tower Place-which houses a variety of shops, Bloomingdale's, and the shops at North Bridge-is a shopper's dream and provides a downtown mall shopping experience. Oak Street is a must, with upscale shops and boutiques, including Barney's and Prada. Revitalized, historical State Street in the Chicago Loop hosts Marshall Field's and the well-known Chicago Jeweler's Row.

Museum Campus, the Theatre District, and Millennium Park: Chicago has more than 50 museums and 200 theatres. Chicago's Museum Campus, which runs along the lakefront, encompasses some of the most highly regarded museums in the country, including the Field Museum, the Museum of Science and Industry, the Adler Planetarium, and the Shedd Aquarium. The Art Institute of Chicago, the Chicago Historical Society, the Museum of Contemporary Art, and the Lyric Opera of Chicago continue to be favorites for residents and tourists alike. Chicago's Theatre District provides a mini-New York feel, with the Cadillac Theatre, the Chicago Theatre, Steppenwolf (founded by Gary Sinise and where John Malkovich began his career), the Royal George, and the Goodman.

Da Bulls, Da Bears, Da Cubs, and Da Sox: Chicago is home to a number of entertaining and well-loved sports teams, including the Cubs (at Wrigley Field, on the north side of the city), the White Sox (at U.S. Cellular Field, loved by Chicago's south-siders), the Chicago Bulls (at the United Center), and the Bears (at Chicago's newly renovated Soldier Field), and the Blackhawks, and the Fire.

Jazz it Up or Get the Blues: The term "jazz" was coined in Chicago in 1914, and the city is well known for its great blues and jazz, which are alive in a variety of clubs and venues throughout the city. Visit Buddy Guy's, named after the legendary blues guitarist; the popular Kingston Mines; or Blues Chicago on Clark. Green Dolphin Street, the Green Mill, and Pop's for Champagne are also popular jazz joints.

A Diverse, International, and Livable City: Chicago ranks second only to New York in the diversity of its neighborhoods. With more than 70 neighborhoods, the City of Chicago has experienced remarkable growth and expansion over the past five to ten years, with most of the growth taking place in the River North, Bucktown, and Near North neighborhoods (closest to the Chicago business district, aka "the Loop"). Other great neighborhoods include Hyde Park, home to the Frank Lloyd Wright Robie House and the University of Chicago; Chinatown; the Pullman District; Pilsen, home to the city's largest bohemian settlement; Little Italy, one of the oldest neighborhoods in Chicago; River West, with its trendy restaurants and chic galleries; Old Town; and the very popular Lincoln Park and Wrigleyville areas. With such a wide variety of neighborhoods from which to choose, living in Chicago is an attractive and convenient prospect.

Eat, Drink, and Be Merry!: Chicago is well known for its spectacular variety of great restaurants. Home to great pizza (with a few favorites, including Giordano's and Lou Malnati's), Chicago offers more than 20,000 phenomenal restaurants from which to choose. Want to experience one of the top 10? Tru, Charlie Trotter's, and Ambria immediately come to mind. Looking for a great steak? Be sure to visit Gene & Georgetti's, one of the oldest steakhouses in the city, or Gibson's, a popular place for celebrities. In the mood for a little romance? Ambria, Everest, Le Francais, and the Signature Room are but a few of the most popular choices. Need a little Italian flair? Coco Pazzo, Gioco, Spiaggia, and Vivere are excellent choices. These are but a few of the many delightful taste temptations that await you in this great city!

A Summer Haven of Activity: During the summer, the city comes alive with good weather and a variety of summer activities and festivals. The months of May through September are packed full of summer fun. Be sure to take in the Blues Fest, Taste of Chicago, The Air & Water Show, Venetian Night, the Gospel Music Festival, the Country Music Festival, and the Jazz Festival!